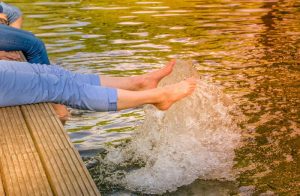 Nobody needs to have perfect, pristine toenails. They work hard on the front lines, so you can expect the occasional bump, scrape, or ding.

A fungal toenail infection, however, is often much more than a little scuff. Toenail fungus can make nails an unsightly mess, and it is stubborn to clear up. Beach days become filled with dread at the thought of unleashing such horrors upon the world!

The sooner you can discover a fungal toenail infection and start treatment, the better. However, even when you have had infected nails for quite some time, there is still hope for reaching clarity again.

There are various types of fungus that can cause an infection in your toenails. The most common type is dermatophytes. However, sometimes yeasts and molds can also be responsible.

A fungus can infiltrate a nail through cracks and weaknesses within its structure. If you have brittle, dry nails, the chances of a fungal toenail infection will increase. So does having poor circulation or other conditions that weaken the body’s ability to fight off foreign invaders.

The fungus responsible for athlete’s foot on the skin can also cause fungal toenails, so it is possible for the condition to transfer into the nail and set up residence.

Like most fungi, those that cause fungal infections thrive in damp, warm areas. Walking barefoot in locker rooms and at public pools can increase risks of picking up a fungus, as can having profusely sweaty feet stuck in warm shoes all day.

What Are the Signs of Fungal Toenails?

Early detection of fungal toenails is key to quicker and easier treatment. Unfortunately, early signs of an infection don’t tend to be as dramatic as later results.

The early signs of an infection can look like small white spots or streaks on the nail, but so can just having a small bump or scrape there. If you see a white blemish on your nails and it doesn’t improve after a few days (or actually grows bigger or changes shape!), it’s time to give us a call. You might have detected an early infection!

Otherwise, later stages of infections have quite obvious symptoms, such as:

In some cases, the nail might start to rise away from the nail bed, causing pain. This is relatively uncommon, though.

If you are seeking to eradicate your fungal infection and get back to clearer nails, start now!

There are several different treatments for fungal nails, including topical and oral medications. These can take several months for full effectiveness. Even then, once a fungus is gone, the damage it left behind will remain until new nail tissue is able to grow in.

In other words, don’t go expecting a miracle if you start fungal nail treatment a month before that big event you want to show off for!

For help with fungal toenails or any other skin and nail conditions of the foot, the experts at Precision Foot and Ankle can help! Schedule an appointment by calling (727) 399-7167 or filling out our online contact form.

Precision Foot and Ankle, P.A. understands that this is a confusing and trying time for everyone and we are continuing to monitor the situation surrounding the novel coronavirus (COVID-19), but we wanted to reassure our patients that we are doing everything we can to help eliminate the spread of COVID-19, while still providing you with our continued, best service. We are OPEN and operational and have been deemed an essential service, as per the state guidelines.

We are practicing all of the cleanliness protocols described by the Centers for Disease Control (CDC), are washing our hands, sanitizing workspaces and customer areas more often, and keeping our providers healthy. None of our staff members have traveled recently to infected countries, but are practicing proper protocols and staying home if feeling unwell, as an extra precaution.

We understand that this pandemic is a first for many of us, and all of us are learning as we go. We assure you that Precision Foot and Ankle, P.A. is taking every precaution as outlined in our guidelines above. However, if you choose to reschedule your appointment for a later date, we will accommodate your decision.

We are all truly in this together. We will continue to monitor the state and federal government updates to provide you with the most up to date information, and provide you with the very best- and safest- services during this time. We appreciate your trust in us and our care for you. We must all stick together during situations like this and we will continue to make you, our patient, our first priority.

Thank you.
The team at Precision Foot and Ankle, P.A.

Call Us Text Us